A Lawyer worked for Paul Paraka Lawyers now PNG Police Commissioner's Lawyer - What does this mean???

On 5 May 2017 Poga filed Judicial Review proceedings in the National Court seeking declaration (orders) that the National Executive Council (NEC) decisions made from 2011 to 213 to establish Task Force Sweep including a direction to investigate Paraka Lawyers to be unconstitutional and to no legal effect.

So what does that exactly mean?

It means Baki relying on a former lawyer employed by Paul Paraka is now asking the court to declare the setting up of Task Force Sweep by NEC was unconstitutional. Therefore all and any investigations, arrests or prosecutions made by TFS since 2011 to-date would be null and void (cancelled).

If successful all charges laid against Paul Paraka currently before the Court would also be dismissed including the warrant of arrest against Peter O'Neill. All other investigations, arrests, prosecutions and convictions by TFS would also be declared unlawful including conviction of Paul Tiensten

Essentially Baki' application would help Paul Paraka and Peter O'Neill walk free from all on-going or pending investigations and charges against them.

This raises a number of important questions;
Conspiracy to Defeat Justice is a criminal offence under Section 128 of Criminal Code.

It is defined as a person who conspires (secretly plans) with another person(s) to obstruct, prevent, pervert, or defeat the course of justice is guilty of a crime. Penalty, upto 7 years in prison.

If the answer is in the affirmative (yes) then can Commissioner of Police be charged by members of Police Force?

Nowhere in the history of PNG or commonwealth countries has the head of the police force gone to court to support the interest of an accused criminal.

Poga's application was declined on the grounds he had conflict of interest being a former lawyer with Paraka Lawyers and close friend of Paul Paraka. In response Poga physically assaulted Damaru in his office.

Damaru filed a formal complaint against Poga who was later charged for assault with the intent to do grievous bodily harm. In March 2016 District Court committed Poga to stand trial in the National Court.

However, rather than being stood down from active duty over disciplinary charges Baki instead promoted Poga to five ranks to Chief Inspector. Poga now acts for the highest office in the Police Force, Commissioner of Police. 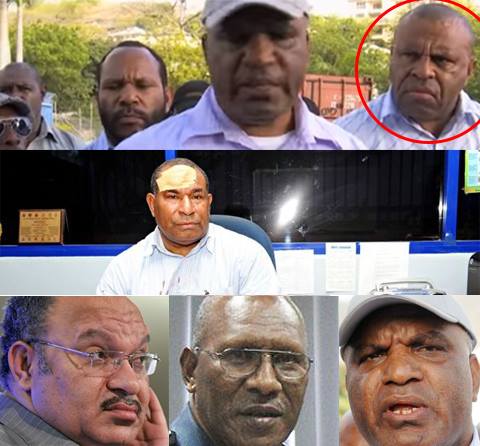 The O'Neill-Paraka link of corruption and its intention to continue be in power and corrupt the nation is also being highlighted in another article. The link of that article is below.