THROUGH the many letters of Complaint we have written to the Seasonal Workers Program office and the office of the Fair Work Ombudsman Australia concerning the slavery working conditions and the treatment of our Pacific Seasonal workers including Fiji....
Now the Labour Hire company PLANT GROW PICK (PGP) that brought our workers from Fiji is deregistered by the ASIC for ripping off our workers and pocketing their tax and Super..
They will not be allowed any more to operate as an approved employers to bring people from Fiji or anywhere in the South Pacific...

Thanks to our tireless effort in exposing him and complaining about him...
The next step now is to take him to Court for non payment of the Supers he ripped off from our fellow Fijians who were working for him and has not yet paid anything.

The first woman who had the courage to speak out against him and reported the unfair treatment he did to our workers is pictured below.
She is Mrs Tia Turaga.
Many work colleagues who came with her condemned her at that time and many alienated her.

BUT NOW THROUGH HER AND THE EFFORT WE MADE TO BRING TO THE ATTENTION OF THE PEOPLE IS PAID OFF...
Even the Seasonal Workers Program have clearly turned a blind eye and let our workers suffered.

Below is a copy of the first letter of Complaint we drafted for Mrs Turaga to copy and send it to the Seasonal Work Head Office in Tasmania....

Dear Sir/Madam,
To Whom it may concern/ references Fiji passport No :882291.

My name is Mrs Tia Q Turaga and I am one of the 13 women Of the Fiji seasonal workers that came from Fiji to work in Emerald Queensland.
We were hired from Fiji by the PlantGrowPick Labour hire Company to work in Australia as Seasonal Workers.
When I arrived in Australia on the 21st Sept 2015, I was asked to work as a cook in the facilities where we were staying in Emerald Farm,Central Queensland.

I worked as a kitchen hand in a dining facility provided by the Labour hire company Plant Pick Grow.
My duty is preparing breakfast, lunch and cook dinner for the 30 Fiji workers that were employed in this company at Emerald Farm in Central Queensland.
After one month at work,I realized that this is not the type of work that I signed in my contract in Fiji.
I believe that the Pick Plant Grow is not an approved Accommodation work provider,so my work as a kitchen hand is in breach of his obligation under his approved employers condition to provide work in the Horticulture industry only.
I also understand that any pacific workers under the Seasonal Workers Program are entitled to the Australian minimum award rate ( Horticulture) no indication on my pay slip to show that I was getting any award rate as I was only paid a flat rate of $100 a day regardless of my working overtime. ( please refer to my pay slips emailed separately..)
Weeks of working in this company no one advised me that I can apply for a tax file number on line using my passport and visa details.
I believe that it was essential to open my super account fund.
I began to question my pay entitlement when a Tongan lady who also helped cooking with me in the kitchen said that I should be paid on a hourly rate and not on a flat rate that I was receiving.

This raises question that I was not paid a correct wage under the Australian National award rate..( Horticulture award. )
I also noticed that some workers working on a piece rate were also complaining that they too were exploited and were treated like illegal migrant workers working 10 -12 hrs a Day 6 or 7 days a week in very extreme whether conditions.
They told me they were too frightened to speak out fearing that they will be sacked and sent home.
( we have sent some copies of their pay slips to the SWP Sydney office which were collecting all evidence from some other workers too.)

There were certain restrictions put on our movements which include :
- No visit from our Australian relatives or members of the Fijian community.
- attend church service.
( These restrictions were later removed when the Australian Fijian communities complained to the Seasonal Workers Program office in Sydney)
Confounding our situation is the lack of understanding of the basis of how a piece rate work applies or how it was worked out in proportion to the volume of work, its benefit or the hardship that may face a slow worker.
Basically it was designed to reward the fast and experience pickers during a picking season a factor that was not considered in our contract when we signed our IFA in Fiji as we are all new and non experienced.

Given that most of the workers were selected from the rural areas with limited education none would be in a position to understand any legal impact of the contract.
I finally decided to alert my Australian relatives and the editor of a social network group called Fiji Australia & New Zealand seasonal Fruit Pickers/Backpackers Forum, Mr Sakiusa Lesuma an ex Fiji Citizen living in Australia.
Because I knew him as a person who always helped in situations like this and well versed with immigration matters.

I raised my concern with him and he said he will help me drafting this letter to be sent to the Department of Immigration which is this letter.
He also told me that something was not right with our rate of pay under the Horticulture award.
Upon his request I texted him our pay slips with others who were not frightened by the employer intimidation to sack us.
Mr Lesuma put a post in his Forum called "Fiji Australia & New Zealand seasonal Fruit Pickers/Backpackers Forum."
A concerned relative in Fiji read it and alerted the Fiji Times.
The report of the abuse was later published in the paper.

The PGP management was also alerted by what was published in the paper by one of his staff and they called an urgent meeting threatening that they will sack and deport those who licked information to the papers.
I told the men who was conducting the meeting that it was me
because I have complained to them a lot of times about our slavery treatment but they just ignore us.
I was told after that meeting that I will be first Fijian worker to be sacked and will be immediately deported.
I was so frightened because he was threatening me.
The next morning a Stand - in man whom we only know as Wili Seru came to our farm accommodation and demanded that I have to go with him to Brisbane Airpoirt for a flight back to Fiji against my wish.
I was not given a warning or termination letter to explain the reason why I am being forcibly removed and asked to return to Fiji.
In defiance of any sensible reasoning I was forced to leave the farm and escorted by this Fijian man to Brisbane.

At the Airport I rang my relatives and Mr Lesuma and told them about my situation I am in.
Mr Lesuma then rang the Farm Owner who employs this Contractor and protested to him..
The Farm owner replied to Mr Lesuma that he will talk to the Contractor who he paid for the Labour arrangement...
Mr Lesuma insisted that I do not leave Australia until I sought out my situation through the Fair Work Ombudsman who supposed to be dealing with situations as this..
The Farm Owner did not know anything about this.
The reason why I am writing this letter is to inform you about my welfare knowing that your department has some responsibility in policing the mechanism of our work rights and our treatment as clearly I am treated unfairly by an approved employer who applies through your department to have permission to bring employers from Fiji.

And since this unfortunate circumstances changes my circumstances I request that my visa should remain valid until I have sorted out my grievances through the Fair Work Obudsman or until the outcome of any dispute is pursued through the proper avenues.
Thank You,
your sincerely 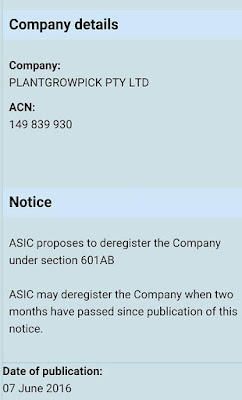 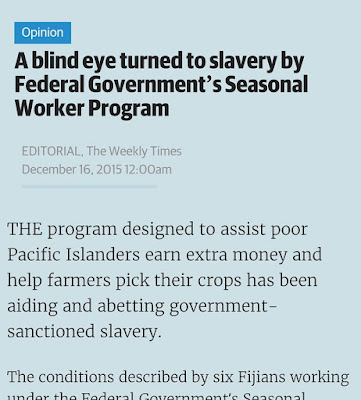 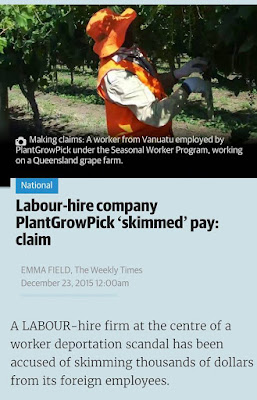