TARI for the first time will create political history in Papua New Guinea in any National General Elections when all the 17 candidates contesting the Tari-Pori Open will have a public debate with seating MP Hon. James Marabe.

Minister James Marape, as a candidate to defend the Tari Pori seat that he held since 2007, is calling for an educated debate on development issues that will enable voters to be given a fair chance to compare candidates during the election period so that the better candidate wins.

“Election comes around once every five years and our voting population in the country has a serious responsibility on hand, and that is to decide the leadership team for 2017 to 2022. Voters must not sacrifice good leaders over choice for money, material goods or tribalism.”

“Election on leadership must be based on genuine leadership qualities a candidate has, nothing more, nothing less. For us sitting MP’s, our performance in our electorates in the last five years will speak for itself.” Minister Marape said.

He said since the DSIP and PSIP programs were introduced in 2012, K40 million to all districts was transferred from Waigani to all districts and a matching PSIP allocation to all provinces irrespective of which side of parliament, members and governors were seated.

“Voters now have every right to question sitting members of parliament as to where they have put their development funds, Minister Marape said. “In my case, I have since last Friday asked the 17 other candidates who nominated to contest against me to an open debate today in Tari and with two more debates later, where publicly, they can ask me of what I have done for the electorate.”

“This debate will give opportunity for my people to pass fair judgment on what I have done the last 10 years and for them to also assess the policy strength of the other candidates.”

On the other hand, James Marabe was implicated in the controversial corruption saga involving Paul Paraka Lawyers. James Marape got an interim injunction from the Supreme Court making him immune from an arrest attempt on the case until the current appeal he has before the courts is dealt with. How easily PNG’s wheels of justice are corrupted!

If you ask for my opinion, I reckon that James Marape is one of the most Dishounourable of the Dishonourable Gang of 111, a foul smelling slime bucket if there ever was one. How did I reach that conclusion? By watching how he operates and how he responds to critical comments about his actions.

Marape isn’t the first PNG politician who removed their shoes, dipped their feet into social media water, and were immediately shocked by the electrified discussion! I feel privileged to be one of probably thousands who witnessed the unveiling of the real James Marape on the internet in April 2011.

It all started with a PNG Blogs article that exposed rampant corruption in the area represented by this hideously obese con man:

All the best to James Marabe and his debates with his rivals. Hopefully someone brings up the corruption saga in the debate and he may put his take on the same! 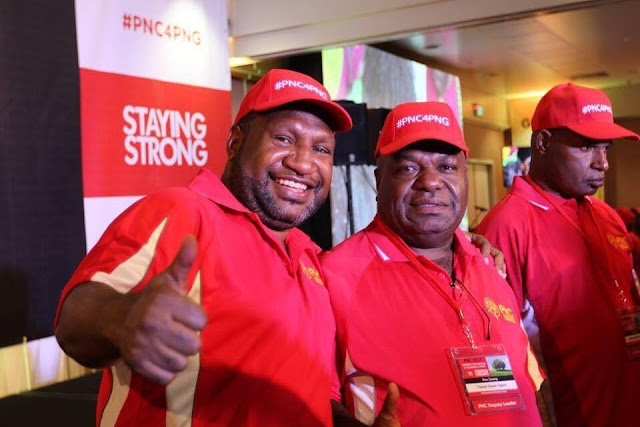