JAMES MARAPE DID NOT SWIM ALONE. HE DID STRUCTURAL DAMAGE TO PNC

Many facebook posts I read have done posts that cast doubt on readers as well as themselves...you are entitled to that.

The tales of Don Poliye and Ben Micha have become a stigma and those memories get renewed in the minds of everyone including members of Parliament at a time like this (on the eve of a senior ministers resignation). One man we forgot to put in that equation is the former Attorney General and Member for SSY, Kerenga Kua.

The stories of Ben Micha, Don Poliye, Kerenga Kua and James Marabe have their own characteristics and differ a lot in the backgrounds and the reasons they used to sever ties by resignation and or decommissioning as Ministers.


Prime Minister, Peter O'Neil removed Don Poliye because Poliye in his capacity as Minister for Treasury refused to support and sign the UBS Loan to buy 10% of Oil Search. Don maintained the Loan was a very bad decision and that it required Parliament apprroval. PM PO took over the position left vacant and signed what Don refused to sign.

PM PO reduced THE Party numbers before Poliye took his Party to Election and PM PO followed Poliye to Kandep and unsetaed him in Kandep. Key: Don was a Party Leader and was terminated and lost his numbers (divide and rule) and also FOUGHT PM PO FROM OUTSIDE.

After Don's removal there was no VoNC mooted. He lost all his very loyal members in Douglas Tomoreisa, Wera Mori and Philip Undialu, Deilala Gore and Late Benjamin Poponawa to PNC and PM PO.

When you look closely at Don Poliye, his politics was built around Grand Chief Sir Michael Somare and he drew his energy from him, his loyal supporters within THE Party and Kandep people.

He was a man who knew no big deals and totally free of any deals.

In March 2014, when sacking Poliye, O'Neill said; "Mr Polye was sacked for causing "instability in the Government. I am not going to risk the economic opportunities of the people by allowing the conduct of a few to derail our stability of the Government and its policies."

On March 21, 2014 the then SACKED Treasury Minister Don Polye has admitted that he refused to sign the documents for a K3 billion loan for the State.

“I would like to make clarifications on issues relating to the position of decision I made. I couldn’t sign the business loan. To buy 10.01 shares in Oil Search is not a wise decision for the Government.

“The money that is being borrowed should be put into tangible developments and not on buying shares. Putting PNG assets on the stock markets is not a good idea.” said Poliye

BEN MICHA'S RESIGNATION AS MINISTER FOR PETROLEUM AND ENERGY

Ben Micha resigned at the eve of a VoNC on some scatchy grounds.

He was all over the place from Manumanu land deal to soo many other issues and his arguments were like someone who had missed out on certain deals.

Unlike Poliye, Micah was shown his exit door by National Alliance party and not PNC.

However on March 2018 Ben Micah publicly said sorry to the Prime Minister Peter O’Neill for trying to topple him in an attempted vote of no-confidence motion in July, 2016.

In a reconciliation ceremony held in Kavieng last Friday, Micah also publicly apologised to Sir Julius Chan, Western Highlands Governor Paias Wingti, Public Enterprises and State Investments Minister and leader of United Resources Party William Duma, Petroleum Minister Fabian Pok, Education Minister Nick Kuman and Byron Chan for what he described as a ‘stupid move’ without any good reason in an attempt to lead a group to overthrow the government.

Mr Micah shook hands and hugged the leaders and gave five pigs, food and traditional pandanus mats as a token of peace.

"Our friendship goes back to 1985, two of us don’t argue, we do not fight when you drive me around in your car.

“Your children call me father and my children call you father. We have been friends drinking Coke and eating scone. One day in July, 2016, I do not know what got into me and I confused a lot of leaders who are here today,” Mr Micah said.

“In a customary way, brother I come to say sorry to you. You did not cause me any wrong, you did not remove me, in fact you gave me all the opportunities to exercise my leadership, I am really sorry about what happened.

“As you know I did not speak to you for two years, after this reconciliation and if you have erased my phone number, I want you to put it back, it is your decision because you did nothing wrong to me and I left.”

Mr O’Neill said that it was a courageous act to say sorry in front of the people and the country.

“A lot of leaders know me, if I did not become a politician I think I would be a priest. I easily forgive people, but that’s my nature,” Mr O’Neill said. (Source: The National March 19, 2018).

I think the priest forgot that he forgave him so after 1 year, Micah seem to fire things at O'Neil again. It was all personal and egocentric on the part of Micah so his resignation was not significant at all.

NOTE: Ben Micah was a PPP man so his departure made no impact to PNC.

Mr O'Neill says Mr Kua was sacked for opposing the government's attempts to change the constitution in relation to votes of no confidence.

According to Mr O'Neill, on June 12, Mr Kua wrote to the prime minister opposing the government's plan to amend section 145 of the constitution, undermining cabinet and government solidarity.

Kua's sacking was a day after police commissioner Tom Kulunga was replaced after a failed attempt on the PMs arrest at his Company Office (Remington) in Konedobu. And, PM PO later on the day claimed that Police, courts politically compromised.

NOTE: Kua was a member of Nationa Party at the time of his sacking.

Finance Minister James Marape has announced his resignation as a state minister in the O’Neill Abel Government.

"Most of my advice find no traction and are non compatible with the Prime Ministers world view, thus it is only fitting that he exited the Cabinet"; said Marape

Marape maintained that he was still a member of the Peoples National Congress and Government.

Peter O’Neill who was in Kavieng said;
"Marape’s announcement has shocked all Cabinet and his staff, Tasol Wok mas go yet".

When he spoke with reporters from Kavieng, the PM took a deep breath and paused before he took composer to speak....a very paniced person he was when he jokingly responded in tok pisin...."Wok mas go yet".

All termination and severing ties and resignations had no real impact on him as the persons he terminated or resigned where members of of other Political Parties.

BUT JAMES MARAPE'S RESIGNATION IS NOT A MATTER FOR THE PRIME MINISTER TO RELAX AND SAY "WOK MAS GO YET".

James Marape is no ordinary Minister or MP, and PM PO knows that too well. He (Marape) is one of one of the corner posts both in Government and PNC and when he left he left a huge structural damage to both Government and PNC....something Peter O'neil is finding it hard to repair.

Marape is no ordinary PNC man. He is the master tactician who put the numbers together after 2 elections to make PO the PM. He knows how to form governments...that means he knows the tricks and the words to lure MPs.

Words are that, PM PO is not talking to Marape as Marape has no business with him but when the Party Caucus Meets, Marape will speak directly to him and he has this word for PO; "PNG has had enough of you and I had enough of you and so do the Members of this Party. It is time you say quit".

LET IS WAIT FOR PNC CAUCUS AS THE MYSTERY WE ARE ALL SEARCHING IS INSIDE PNC CAUCUS. 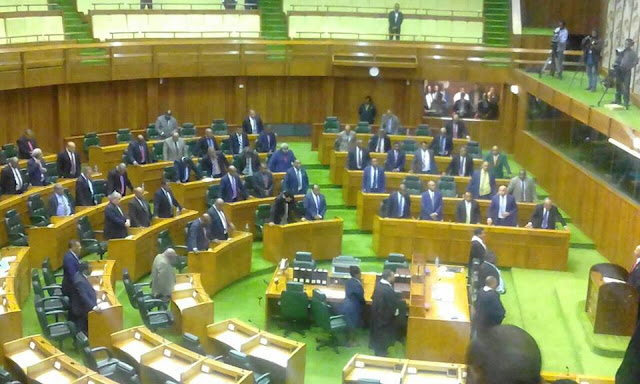