Australia, US talks about the rotten political practices and corruption in Papua New Guinea

PAPUA New Guinea is entrapped by deeply corrupt politicians who have enriched themselves on resource revenues and Australian aid programs, according to United States diplomatic reports.

Australian government officials are reported as saying that generational change in PNG politics following the eventual departure of the ailing founding father and former prime minister Sir Michael Somare is a "false hope". They describe the PNG government as a ''totally dysfunctional blob''.

The damning assessments of Australia's nearest neighbour and former trust territory are contained in confidential US embassy cables obtained by WikiLeaks and made available to The Saturday Age.

In a 2008 briefing the US embassy in Port Moresby noted that resource revenues and Australian aid have served "more to enrich the political elite than to provide social services or infrastructure. There are no large-scale local businessmen, but numerous politicians are relatively well off".

PNG is Australia's largest recipient of foreign aid and in 2011-12 will receive more than $480 million. The Australian development assistance agency, AusAID, says PNG has "some of the worst health and education outcomes in the Asia-Pacific region".

In a May 2007 cable titled "Ponzi politics", the US embassy gave a damning account of PNG politics.

"Steeped in traditional magic and innocent of modern economies, PNG's citizens prove easy marks for Ponzi schemes which proliferate throughout the country,'' the embassy observed. "Now it's election time … and the politicians are dusting off their bottles of snake oil … it's an appalling spectacle of disregard for governance.''

In another report before the 2007 election, PNG's most recent national poll, the US embassy memorably reported that "the pork has hit the fan" as Sir Michael Somare reallocated ministerial portfolios to ensure that his cronies were well placed to buy political support.

One minister who benefited from Somare's patronage had previously held the health portfolio and was "mostly remembered for his insistence that he was just a politician and therefore could not be held responsible for the fact that the country's hospitals had run out of medicines while his ministry was still flush with cash".

The embassy's report painted a grim picture of the Somare administration's commitment to law and order: "The single most pressing problem facing PNG is the almost total collapse of the police force. So it is doubly disappointing that the effective [Police Minister Bire] Kimisopa was pushed aside. The portfolio has little control over expenditure. But his focus likely discomforted Somare and his cronies for the same reasons they worked to scuttle a large-scale Australian package which threatened to dramatically improve police performance."

The cables confirm that Australian officials have no illusions about the state of the PNG government. After a mid-2007 discussion with Australian high commission staff in Port Moresby, the US embassy reported that "one Australian analyst described generational change as a 'false hope'''.

After a long period of illness, Sir Michael Somare has been removed from office, though he is still protesting that his ouster was illegal. PNG's next national election is scheduled to be held next year.

■ Up to 3300 US diplomatic sources - including many in anti-US regimes who could face jail or death if discovered - have had their identities revealed via the release of the unedited WikiLeaks diplomatic cables trove.

The release occurred after a link was found online between a password included in a book by a Guardian journalist, David Leigh, and an encrypted file of the entire database stored on a filesharing site, thepiratebay.org. The news spread via Twitter and by yesterday the 251,287 unedited cables were spreading across the web. 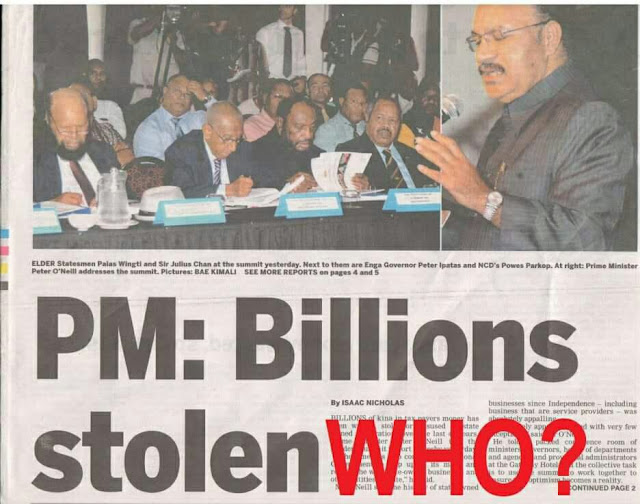