FAKE Facebook profiles are being registered by desperate people who support corruption and the worst political party in Papua New Guinean history, the People’s National Congress.

No political party has bankrupted PNG except the PNC who have bankrupted our beautiful country not once but twice!

A Facebook profile under the name of ‘Sepik Vincent’ has been recently registered by faceless, nameless cowards thinking they will use it to post false and fake news to split the opposition parties.

This fake profile was not set up by me as I would never stoop so low as to take such an action.

It is the act of a few corrupt individuals who do not have any moral convictions and who have no love for this country.

All they care about is their stomach. Feeding themselves and their families with corrupt money does not trouble them or their corrupt conscience. Some have shifted sides several times and it is very sad that such people with low morals want the rest of us to follow them.

A united opposition is a huge threat to the PNC, National Alliance and United Resource Party - the coalition of the corrupt who formed the worst and most corrupt government in our short history.

Opposition parties Pangu Pati, THE, PMFC, NGP, MLP, National Party and others have formed an alliance and are heading into the June-July elections in support of each other. This position has not changed.

Pangu will never disrespect its coalition partners. The only people seeking to do so are those who support and benefit from corruption. They know they will soon lose this corrupt lifestyle of free handouts and are desperately trying to cause divisions within the opposition.

I urge all representatives and supporters of opposition parties to do some due diligence when such posts appear on Facebook. Simply check the profiles of those that propagate and post such lies and if they were set up recently then they are definitely fake.

Please do the right thing and report these profiles to Facebook and, most importantly, don't believe their lies.

I state once again that neither I, Vincent Moses, nor Pangu Pati will disrespect or speak badly against our coalition partners. 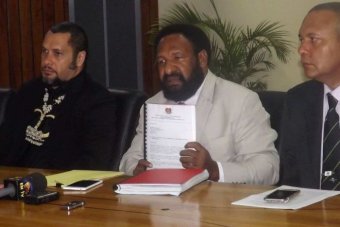