What fellow PNGans say about Paul Paraka in his move to sue the Govt of PNG.

Paul Paraka, can translate the law book in his mother tongues then no one can beats him (God's given talent).

That's what I heard when I was in primary school some twenty years ago.

Paul, has a good and colourful characters. Characters are so colourful like the bird of paradise. What a coincidence, his birth name (Paraka)refers to Bird of Paradise in Melpa language (Hagen.)

Birth of paradise is filled with so many colors. And its portraits to colourful characters.
Let's go back to the Old Testament ( Bible)... When Joseph wearing a colourful coat made by his father (Jacob,) his brothers felt jealousy over him and cast him into the pit .

Likewise, Paul Paraka worn a colourful coat (character,) perhaps country's leaders are playing (jealous) game on him.
He, helps needy, he provides jobs for the job seekers, he helped and molding leaders of tomorrow. What else the PNG government trying to getting it from him?

He has a natural talented brain( God's given brain) and no one can take it away from him. His character is like a good aroma can be smells by everyone.

PP. don't forget these two things.... 1. You have a brain and they are now fight over it. USA. tries to making war with North Korea, but is of nothing else, but only knowledge and wisdom. Koreans has brain (Knowledge,) so they (USA) jealous over North Korea.

2. You've got a nice character that is so colourful and suitable to all Grassroots.
It is for these two reasons the are trying to put you down (in the pit) like Joseph in the Bible.

Nothing will stop you. Go for justice and let the truth prevail.

God will lift you up.

Hi bro, I knew you in your high school days...You used to be a good kingfisher(bird) trapper... trapping was your hobby as observed when I used to walk back from school to my nearby village (Bepa)...

I secretly have learnt a skill from your trap to catch bird by putting a bait(insect) attached to string and the loose end tied to a dried corn, placed on the silver part of the banana leaf and when the kingfisher bird flew down from the tree branch and snatches the bait and fly back..so hungry and swallows the bait.. the string gets entangled to the tree branch and it used to be trapped..

Mr.Paraka, a smart looking lad used to climb that tree and relaxingly captures the helpless bird and puts it in his bag.. Bro those capturing skills naturally are in you and as a very professional lawyer I believe you could apply similar skills to capture the culprits involved whether big or small to compensate for the punishment/suffering you & your company went through including the thousand plus people who benefited from your Paraka Lawyers Co.

I am very interested to see the latest development of the upcoming cases you are bringing up .. 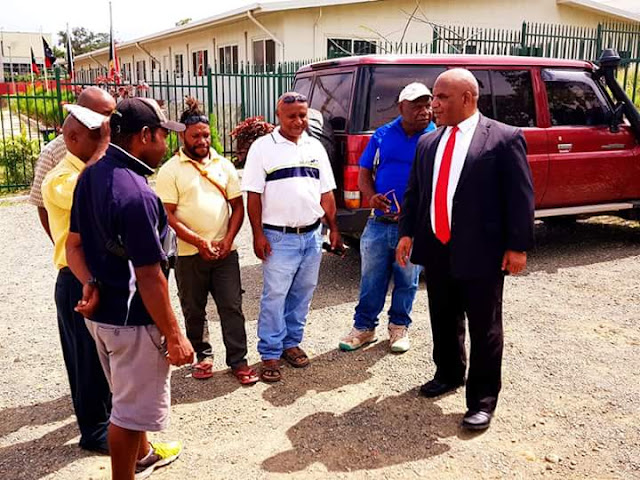 Paul Paraka writes about his case against the State:

The decision on my case is scheduled to be handed down by the Waigani National Court this Friday 7th September 2018 at 9.30am. I am confident of a big win!

The court will decide on the legality of the unlawful actions of the sweep team in the last 5 ears;the outcome of this case will decide the fade of so many people including politicians and public servants that deliberately connived and colluded to sabotage and screw my law business.

While they will abuse and misuse state institutions to their advantage(which is always short lived) I will continue to have faith in and use the power of the rule of law and the independent and very vibrant judicial system to adjudicate my grievance to do justice.

.All of the evil minded animals who castrated my destruction by abusing powers and state institutions will never run away,I will follow them slowly and eventually the law will catch-up on them and in a very big way!

I'm inviting all Media outlets to turn up in court on Friday as I will be making a big press release at the court premises after the decision!